ikaria: ​wild landscapes and the secret of long life

what to do in ikaria island

ikaria island in north aegean
​High, bare, rocky mountains alternate with green slopes, flowing streams and beaches that could have been imported from the South Seas. Ikarians have a legendary capacity for fun, food, mirth, music and drink. Are you ready for something completely different? Come to Ikaria. It is an island-phenomenon unlike anywhere else in Greece, or the world. ​

Icarus, the impetuous son of Daedalus who disobeyed his father and flew too close to the sun, aptly gave his name to this rocky island in the North Aegean. Things are done differently here. No one is ever in a hurry, which might account for incredibly long life spans, and in some places the normal day/night cycle is completely turned on its head. The island itself is a study in contrasts and the unexpected.High, bare, rocky mountains alternate with green slopes, flowing streams and beaches that could have been imported from the South Seas. Ikarians have a legendary capacity for fun, food, mirth, music and drink. Are you ready for something completely different? Come to Ikaria. It is an island-phenomenon unlike anywhere else in Greece, or the world.

What to do in Ikaria

Village fairs
Every village takes advantage of some saint’s day to hold a fair involving music, dancing, tons of food and tanker-loads of wine and raki. They often last all day and all night but even the oldest don’t flag. If you’re at all interested in local traditions and people, you’ve got to experience one or more. Luckily some of the largest are in August;  at  Christos in Rahes on the 6th, Langadas, Monokambi and Akamatra on the 15th, Karavostamo on the 17th and Maratho on the 27th.

Christos
If you thought the rest of Ikaria ran more slowly than elsewhere, prepare for the logical conclusion( or maybe that’s logic turned on its head) in Christos. Here the baker is the only one awake and working during the day. All the other shops, including banks, open at night when the village comes to life. The origins of this topsy-turvy schedule may lie in the fact that everyone was working in the fields during the day so it made sense for the shops to open after dark.

Nas, Artemis’ beach
A large stream cascades down the slope and meanders into  the Aegean, watering plants and trees that provide shade to a host of laid-back young people. The scattered  remains of an ancient temple to Artemis Tauropolou lie where it flows into the sea. Two of the aspects of Artemis worshiped here were nature’s seminal power and its impact on the landscape.

The beaches of Mesahti and Seychelles
Two beaches as different from each other as they could be, yet both incredibly special. Mesahti is huge and golden, ideal for water sports, sand castles, refreshing drinks and the soothing sound of the waves while your soul drinks in the blue horizon.
A small beautiful beach, reached after a good ten-minute hike, Seychelles is as exotic as its name would suggest. White rocks, boulders and cliffs combine with translucent blues to magic up the stuff of dreams. It’s a good idea to bring supplies of your own, as only occasionally does a small boat come by hawking “something to eat, something to drink”.

Manganitis and Karkinagri: two villages you must discover
On Ikaria the surprises begin where the road ends. In the remote village of Karkinagri, the inhabitants listened to their inner selves,  decided they could do without things many of us consider essential and live life in its purest form. There are, for instance, no shops! In Manganitis you won’t believe the sculpted shapes of the rocks plunging into the Aegean or the ferocity with which they pierce the sky. Here, nature rules and  everyone is more than happy with that. As for time, you can add watches and clocks alongside shops on the list of objects that are pretty scarce round these parts!
Rock  against pirates
A rare architectural phenomenon, anti-pirate hideaways. They were created during a ‘dark age’ around 1700, when the inhabitants lived in constant fear of pirate raids. Necessity being the mother of invention, the locals made windowless, chimneyless houses that were completely camouflaged by huge round boulders, fortifying them with stones. Sometimes carefully hidden under trees, partially buried in the ground and roofed with large slabs of slate, they are marvels of ingenuity.
Health Spas
Lady luck has blessed Ikaria with a wealth of health spas. Eight natural thermal springs, which surface at various points on the island, revitalise body and soul. Who knows, perhaps you too could discover the secret to the inhabitants’ famed longevity? 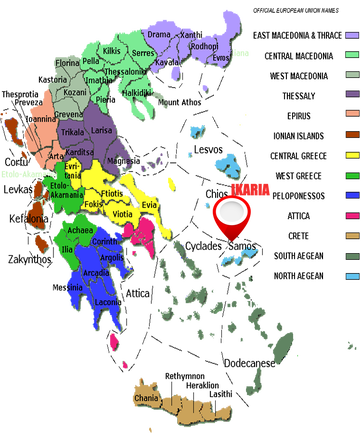