One thing is certain: although far from major urban centres, you’ll get here easily - by boat or plane - but will find it hard to leave. Each island in the North Aegean has its own identity. Each is a destination with unique wild beauty and rich cultural heritage. Largely unexplored, this cluster of islands may not be tourist-magnets but that is exactly what gives them their charm. Kick back and relax beachside or go exploring in these unspoilt and seductive treasures on this side of the Aegean: Lesvos (Mytilini), Chios, Samothrace, Thasos, Limnos, Ikaria, Samos, as well as Agios Efstratios, Fourni, Psara and Innouses.
Magnificent sandy beaches with crystalline water, picturesque mountain villages, dramatic coastlines, delicious food, rich history and rare natural beauty make these islands ideal holiday destinations for those in search of seaside escapes, local traditions and unforgettable historic sites. The larger islands, such as Lesvos, Samos, Chios, Ikaria and Thasos are especially perfect for families, couples and groups of friends, while the smaller ones, like Agios Efstratios, Fourni, Psara and Inousses, are paradise for sailors and intrepid travellers.

Beaches of virgin beauty
Limnos  is the island with the most virgin beaches;  more than 100 in fact – half of them sandy, all of them uncrowded. On Chios you’ll find another 90. On Lesvos, discover one of the best beaches in the Aegean, Vatera, as well as Sigri and Eressos. On Chios, you’ll swim at Mavra Volia (Black Beach), whose dark volcanic pebbles are unlike anything you’ve ever seen. On Ikaria, at Nas, a modern beach meets antiquity – the remains of an ancient temple of Artemis reach as far as the sea. Popular Mesahti is ideal for water sports. And Seychelles, a small exotic bay with emerald water, looks, as the name suggests, as though it has been air- lifted directly from the Indian Ocean! On Samos, the best beach is Chryssi Ammos (Golden Sand) and, on Thasos, you’ll find Paradise, quite literally.

A date with history and mythology in the North Aegean
In the holy sanctuaries of the North Aegean islands, you’ll be enveloped in myth and mysticism. On Samothrace, you’ll be initiated at the Sanctuary of the Great Gods, where ancient, enigmatic rites and rituals were once performed. On Limnos, you’ll feel the presence of the god Hephaistos, the protector of the ancient city of Hephaistia and, at Ikaria’s Nas (Naiades), you’ll find traces of the goddess Artemis Tauropolou.

Then there’s Samos, the island of Aristarchos, the astrophysicist, and of the great mathematician, Pythagoras. On Chios, you’ll be mesmerised by the mosaics in the Nea Moni Monastery (a Unesco World Heritage Site), which was established in 1024 by the Byzantine emperor Constantine IX Monomachos. At Samothrace’s Archaeological Museum, a replica of the Winged Victory of Samothrace (whose original is housed in the Louvre) stands with her wings spread, ready to fly. History, myths and culture: the islands of the North Aegean will enchant you with their mystical ambience.

Harnessing the power of nature
Nature’s power is at play everywhere you turn. Windsurfing, kitesurfing, water skiing at Skala Eressos and Vatera on  Lesvos, along  the eastern shores of Limnos as well as at popular Kokkari in Samos. Globetrotters come from all over to trek the islands’ trails, which wind through beautiful, wooded scenery. Bird watchers head to the three lakes that make up the wetlands on Limnos, as well as the Kalloni wetlands on Lesvos, natural habitats for a diversity of bird life. Don’t miss the famous festivities at Ikaria’s village fairs, where the wine and raki flows and the music and dancing lasts all day, and all night.

Delectable Mediterranean flavours
Get a top up! The North Aegean islands promise to fill you up with the most exquisite treats. Samos will serve you some of its award-winning dessert wine, whose reputation dates back to antiquity. Lesvos’ ouzo is world-renowned, and its history spans two centuries, the most famous brands being Plomari and Mini. Chios’ most treasured product is, of course, the rare and ‘miraculous’ mastic, but don’t leave without trying its syrupy sweets and preserves, made with in-season fruit. Lesvos is also famous for its exceptional oil, pressed from the yields of the hillside olive groves. The extra virgin olive oils of Lesvos – and specifically from Mytilini, Kalloni and Plomari – have all been certified as PDOs – protected designation of origin.

Sights and attractions unique to Greece.
You are here: 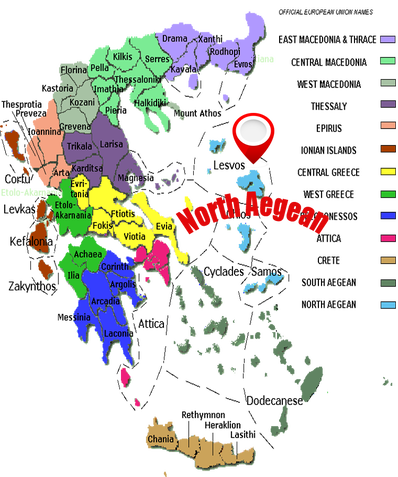