The Island of Contradictions UNEXPLORED TREASURES

what to do in karpathos island

Wild, untouched beauty in the Dodecanese, sculpted by winds, customs and centuries-old traditions

The second largest island of the Dodecanese has no equal. It holds on dearly to its past in its ancient acropolis, caves, churches and even its traditional dress. The setting is dramatic in all the best senses of the word: stunning vistas from untouched, cliff top and mountainside villages that defy gravity and a fearful hammering from the wind to keep vigilant watch over the Aegean. In Karpathos you’ll discover an island with its Greek soul intact, living traditions, people of real character, musical skills passed down the generations and legendary festivals – untarnished by modern fads.

What to do on Karpathos
Olymbos: a timeless eagle’s nest
Exposed to the winds, Olymbos balances on a rough-hewn, remote ridge like a tightrope walker. Its houses spill down the slope seawards, tightly bound to each other and rooted in the rock. This harsh, wild place kept pirates and marauders at bay, and it still resists intrusions by today’s more peaceful invaders. Just what you’d expect from a town that has been defying the tides of time since the 9th century.


A colourful history of the Dodecanese
In a  single glance, you can take in a wealth of clues as to the cultures that have had an impact here. Among the significant sights and attractions are early Christian churches, ancient Vroukounta and Arkesia, the castle and the acropolis at Aperi, the Roman cistern at Lefko, the beehive tombs at Karpathos town and Arkasa. And then there are the more recent structures left by the Italians, such as bridges, aqueducts, wells, windmills and the outdoor ovens of Olymbos. Don’t miss this opportunity to travel back into the past.
Manners and customs alive and unspoiled
On this island, it’s as if time has stood still. Here you will find an authentic Greece, like something out of a bygone era. Many women still wear the traditional dress, while men harvest their crops with scythes. Men and women sit separately at village festivals, where musicians play the bagpipes, lyre and lauto, crafted on the island, and sing in the style of their ancient ancestors. In northern Karpathos you’ll find even older, sometimes strange customs still practiced faithfully. The festivals have to be lived to be believed.


Emerald waters and countless beaches
The award-winning sandy crescent of Apella is the most beautiful beach on Karpathos and a contender for one of the best in the entire Mediterranean. Emerald waters will also tempt you in at Kyra Panagia, Ahata, Lefkos and Ammopi – only the beginning of a long list.

Hidden gems of Karpathos
Nature and history in the untrodden north
The north, above Olymbos and all the way to Saria, is a favourite haunt for birds, seals, frogs and salamanders as well as the home of large, tasty but elusive fish. There you’ll also find the palaces of Doric Nisyros, sacred ancient Vroukounda and exotic Tristomo.
The fertile plateau below Olymbos
It’s like stepping into another world. In Karpathos, the plateau of Avlona invites you to travel in time around  its meticulous patchwork fields, barns, scattered farm dwellings and crofts. You just pick the century.
Walk to your heart’s content
If there is a hiker-paradise in the Aegean, it must be on Karpathos. Centuries-old cobblestone paths lead to forgotten ancient sites, roadless villages without electricity or other mod cons and breath-taking views. The hiking trails crisscross the island but are best in the north.
A rare ecosystem
Karpathos, along with the islet of Saria, is one of the most important islands in Greece for the protection of rare species and ecosystems. Two sites are included in the Natura 2000 network for their bird and seal populations. 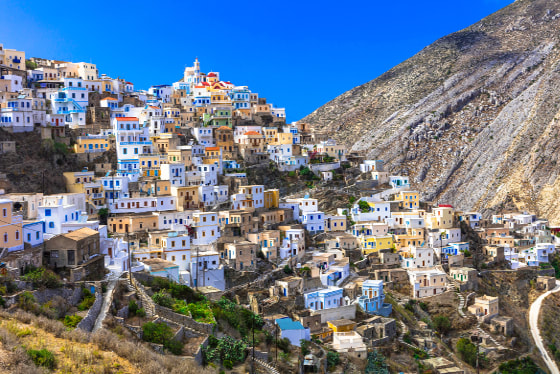 The most famous village in Karpathos island, with great history and amazing panoramic views.
Olympos is located in the North of Karpathos, build on a mountain ridge. The village was not accessible by car until recently, but today Olympos is connected by asphalt road to the south. For centuries the one and only connection with the outside world, and with the other villages of Karpathos was the port of Diafani.
The locals are very proud of their traditions, the women in Olympos wear traditional costumes every day. There are two types of these clothes: one is for weekdays - a black colored apron and a simple scarf around the head-. If they are celebrating, the women in Olympos wear colorful clothes and a double row of gold jewels.
Because of its traditions, people say that Olympos is a living folklore museum, with idyllic atmosphere.

According to mythology, the island was created when Poseidon in titanic battle as he struggled with Titan Ephialtes, he cut off a piece from Karpathos side and buried under this opponent.
Ruins of the city are sunken in the Strait of Tristomou, between Karpathos and Saria. Signs indicate the existence of Apollo Porthmiou sanctuary. There are traces of human presence since the Neolithic Age and the early Bronze Age, and since historical times have been found remains of fortifications on the west side of Castello hill. Remains of settlements are in Argos (north) and Palaces (east), where excavations have revealed several findings. Palaces have beautiful beach with a few trees.
Furthermore, the island is an important habitat and breeding site for birds and marine organisms. Note that the northern Karpathos, Saria, and the sea area around them, belong to the European network of protected areas Natura 2000, thanks to the variety of habitats available and rare plant and animal species that host.
UA-108267567-3